“I am somebody. I can do something.” 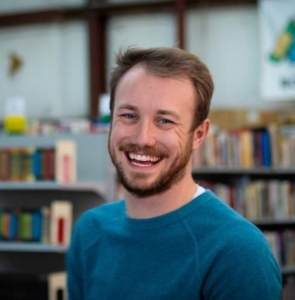 Justin Bray’s professional career began with Chick-fil-A in various training roles until eventually accepting a position with their home office, helping open new restaurants all across the nation. He hoped to use this opportunity to find a new place to call home– perhaps something a touch larger than Grayson, GA where he grew up- but not quite as stressful as Atlanta. It wasn’t until after a year of travel with Chick-fil-A that he returned to Grayson and took a trip just down the road from home to a beautiful place called Athens, where he fell hard and fast for the kooky little town.

This theme of opportunities being “just down the road from home” continued on through Justin’s life, even up to today. Like how opening the Rook & Pawn Board Game Cafe would lead to a position with Creature Comforts Brewing Company. Or how his spouse grew up just 5 minutes away from his childhood home, and how they reconnected shortly after she began her teaching career in the Clarke County School District. And even how his relationship with Books for Keeps began in a volunteer capacity before becoming the ‘Stop Summer Slide’ program manager and now the organization’s executive director.

Justin’s passion for people shows through his work and daily interactions with those in his community, and he couldn’t be more excited to carry that passion along with him to Books for Keeps. In his spare time, you can catch him podcasting, riding bikes, playing board games and having fun in the kitchen with his family. Email Justin

Meet our director of finance and administration 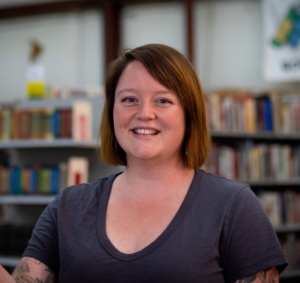 Rainey Lynch began working with Books for Keeps in February 2017. She joins the team with a background in communications, bookkeeping, and administrative management – a perfect fit, as she has been tasked with coordinating the organization’s social media and traditional media strategy, as well as managing Books for Keeps’ administrative, bookkeeping, and human resources needs.

Rainey was born and raised in South Georgia, where the rural setting helped foster her lifelong love of reading. After completing her degree in English literature at the University of Georgia, Rainey could not bear to leave Athens. A year after graduating, she was joined in Athens by her partner, and the two have been active community members ever since.
In her spare time, Rainey enjoys writing, volunteering, lying in the yard with her dog, biking about town, playing with her daughter, and reading- naturally. Email Rainey 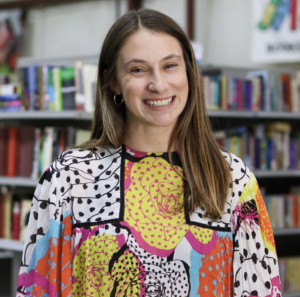 Colleen Craven recently completed her Masters of Social work at the University of Georgia School of Social Work where she also received her BSW. While pursuing her degrees, she interned at the Athens Area Chamber of Commerce which evolved into a Special Operations Coordinator position that was created for her. Additionally, she completed her year-long field work practicum at the Athens Area Homeless Shelter. At the shelter, Colleen created and oversaw all programming for the children currently in AAHS services. Both positions provided opportunities to bridge the nonprofit sector with community members and stakeholders willing and able to offer support.

In her own life, Colleen has experienced the power that books have to normalize otherwise difficult life experiences and foster connection to the experiences of others. For example, ‘Tell me Again About the Night I was Born’ is a children’s storybook detailing the events of parents finding out their adopted child was born and ready to be met and brought home from the hospital. The book showcases illustrations of the family growing together and helps broaden children’s definitions of family. This story laid the foundation of Colleen’s family life as an adopted child herself, which she credits as a foundational component for the acceptance and excitement she experienced in her own childhood.

At Books for Keeps, Colleen reads and shares powerful books targeted for children as both her hobby and job while overseeing the Get Comfortable Literacy Pilot Program in Stroud Elementary School. By providing high-interest books and incorporating 1:1 Literacy Mentoring, the program empowers 2nd and 3rd graders reading levels. Email Colleen 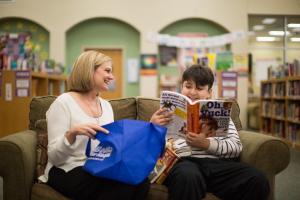 In 2009, Melaney Smith heard about a little girl who was not looking forward to summer. The reason? This second-grader loved to read, but had no books at home. Melaney asked around and learned that there were many children in the same situation. In asking the question, “Why doesn’t somebody do something about this?” she realized, “I am somebody. I can do something.”

Books for Keeps was launched from that point as a grassroots effort, and has since morphed into a research-based nonprofit dedicated to ending summer slide. It was all built around Melaney’s realization that she not only had the power to get books into children’s hands, but also to recruit the best people to help her do it.

After serving as acting executive director during the organization’s early years, Melaney transitioned into the role of (very active) volunteer. She currently works full-time as director of prospect management and analytics for the UGA Terry College of Business, and lives in Athens with her husband, Bayne, and two cats. Email Melaney

Meet our Board of Directors